How we create our pet urns

After supporting many families, we know how important it is to find the right memorial, urn or keepsake. When it comes to a much-loved family pet, finding something that captures the true essence of their character can help to ensure their spirit remains an ever present part of family life. That’s why all of our breed specific urns originate from a single, carefully researched, hand sculpted model; made just down the road from our Head Office in West Sussex. For more than 15 years now, we’ve turned to highly talented Canadian sculptor, Marji Talbot, to encapsulate the distinct features of some of the UK’s most popular dog breeds, as the first cast for our ashes urns. We caught up with Marji recently to find out more about her and the crafting process.

Choosing the next breed

Before Marji gets to work on the next Petributes sculpture, there’s a long research phase. The Kennel Club recognises over 200 breeds currently and many of today’s most popular dogs don’t feature in that list, due to their ‘mixed heritage’. So it’s not a straightforward process! And when we’re considering a new ashes urn, there’s little point basing that decision on today’s most popular breeds. With most breeds having average lifespans of more than a decade, its actually the breeds that were popular ten or even 12 years ago that tend to feature highest on our list. In 2021 for instance, we began work on the cockapoo, which was an extremely popular breed back in 2010 due to the research around the anti-allergen properties of its coat.

How do you capture the breed?

Any dog owner will be able to tell you why they love the features of a particular breed, but they’ll equally tell you that their dog is unique. Whilst there are very clear breed standards, each dog is subtly different, so how do we develop a single cast that will appeal to all owners – picking up key character traits whilst reflecting each beloved pet?

Marji undertakes an intense period of research, collating dozens of images of the breed and studying anatomical books too. She’s looking for a number of things at this stage. First and foremost, it’s the anatomical structure, looking at the skeletal form under the fur in a number of typical poses and then how the dog’s body sits, both in a relaxed and tense position, to understand where the legs fall and the line of the back rising into the neck and shoulders. Next Marji will focus on a typical gesture, is there something specific to that breed in the way they stand, sit or lie down that will help reflect the essence of that breed? The research phase will take place over a number of sessions across a week or two, with Marji making numerous initial sketches.

“I’ve been sculpting for more than 15 years, beginning at art college, but it’s expensive to get set up and you need a lot of space to make it into a commercial enterprise. Anything ‘arty’ can be hard to make a living from and so I’ve used my skills in other ways, running courses, providing tutoring and before the digital era, I worked as a picture researcher for a publisher, photographer and illustrator for educational books. So, I am used to drawing and sketching and I understand the rules around composition and structure”. 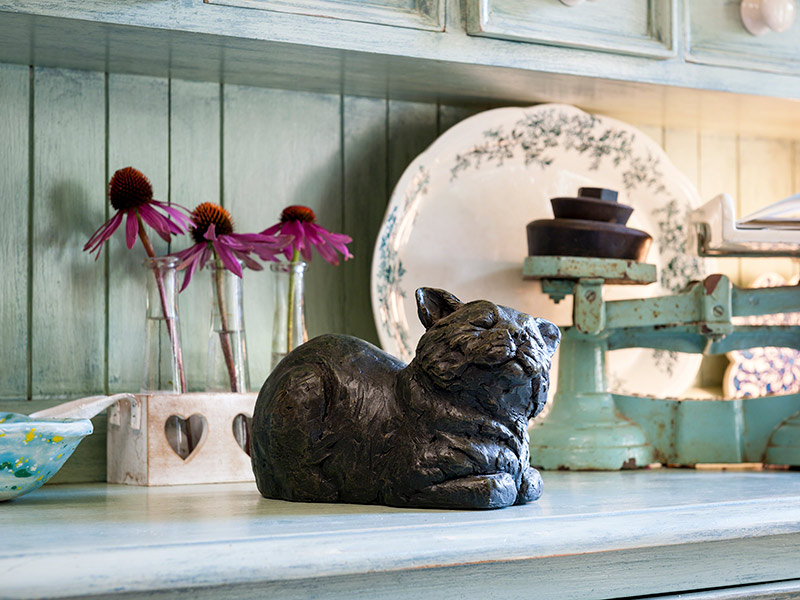 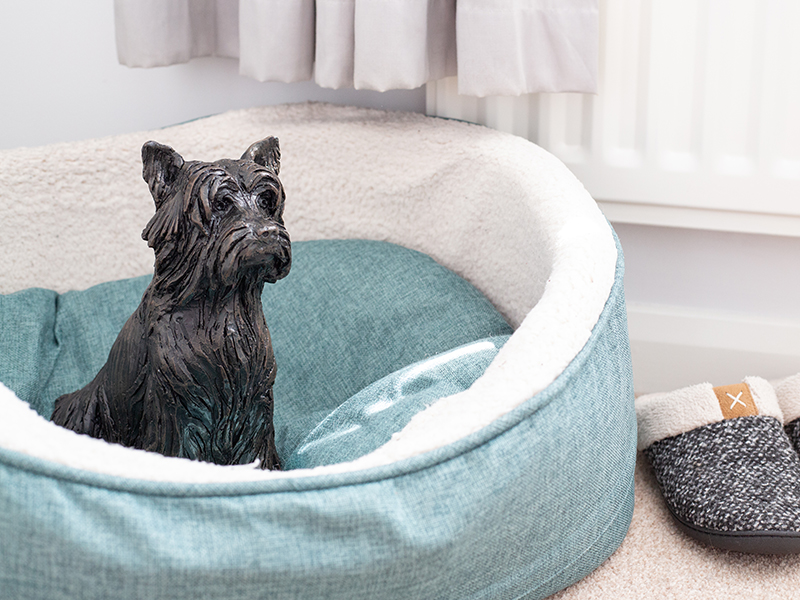 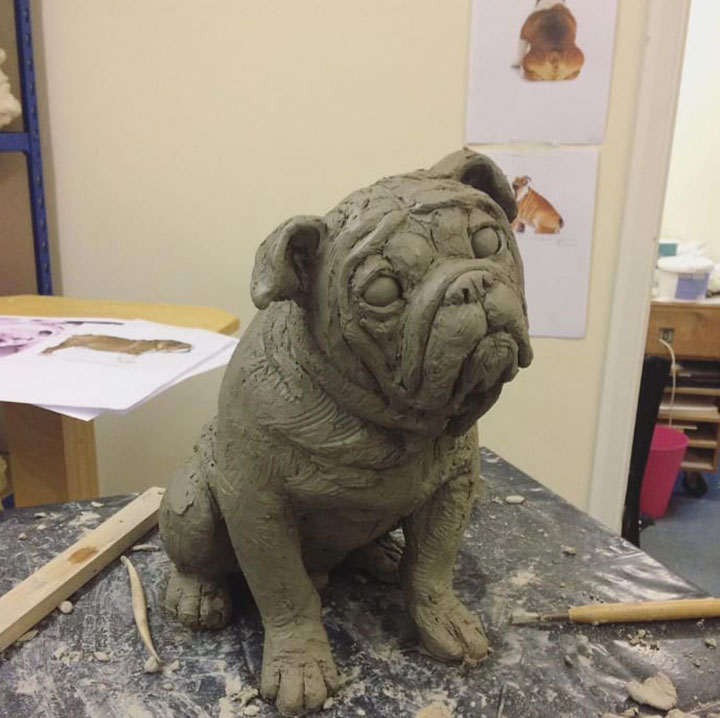 Once the character of the pose is agreed with Richard, the next phase is the initial sculpting of the dog in clay. Richard will also have given direction on the size of the sculpture based on the potential volume required for an average size dog of that particular breed. “People don’t want giant urns, and we appreciate there must be a tasteful size/scale, so rather than going back and making the actual dog bigger, there are sometimes different ways to achieve the same outcome. There have been instances whereby we’ve added a base or plinth to the sculpture, to increase the capacity”. This is not a fast process, and can take up to ten sessions, each of a few hours, carefully developing the structure and gesture. Marji explains that really furry dogs are always tricky because it’s easy to lose sight of that underlying anatomy. Equally though, one of the most challenging projects was the greyhound because they have no fur to hide their muscular physique and so there was no room for error. Despite this Marji has enjoyed creating every single canine sculpture for our urns.

“I don’t do anything else quite like this. Whilst I create sculptures for other people as one off pieces, they’re very rarely animals and typically are used for artistic display purposes, not as ashes urns”.

Once Marji has got to a point where she feels it’s close to the finished article, prior to starting the mould it must be approved by Richard Bush (Founder of Petributes). “I work very closely with Richard on each sculpture as he’s got to be happy with the final product before it goes through the moulding and casting process and then off for manufacture. Inevitably  there are small changes to be made before he gives the thumbs up.”.

The first stage of mould making uses a layer of silicone rubber which when painted on will encapsulate every detail of the sculpture. This is followed by a resin and fibreglass outer layer or jacket that holds the silicone rubber in place. Once finished, a single mould can be used to produce up to 20 individual casts though for our purpose only two or three are required. These casts are made from a bronze/copper resin, a material which looks and feels as close to a real bronze sculpture as possible. Fresh out of the mould the casts have a very matt chocolatey look to them so a finishing process of polishing the surface with wire wool then applying certain chemicals is used to achieve a bronze patina with a greater depth of tone and colour. Finally, a wax is applied to protect the surface. Like each of the previous stages, the casting takes time, normally around 3-4 days for the silicon and resin phases and then a good day for the finishing.

As a minimum Marji will cast two versions from the same mould, one for us to begin showing our customers and for marketing purposes, and one master which will be the version from which the production cast is made.  The entire process can take up to two months and includes hours of intricate work, but Marji is committed to this focus to make the cast as true to the breed as possible.

“You can’t just work from an observation to create these sculptures. If you do, you risk creating a very unnatural pose and it will not hold the character that will appeal to the pet’s owner”.

Marji is currently working on our next breed and even in these early stages the detail is emerging from the clay. Ultimately each one of our urns benefits from the time and care Marji takes in studying each breed and translating it into a final bronze resin cast. “It’s challenging, rewarding, frustrating and enjoyable, but above all I do take heart knowing that my work can help a family hold on to the precious memory of their pet, for many years”.

About our products
About Us

You have chosen a product that can be personalised. Would you like to personalise it now?